The legend of Sabrina (the woman in this statue) dates back to the 12th century, where it is found in a compilation of welsh traditional tales. 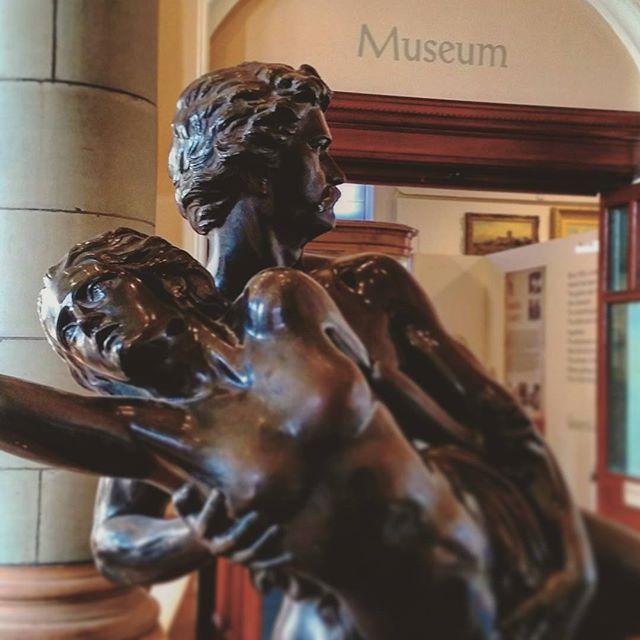 The Legend of Sabrina

“There is a gentle nymph not far from hence,

That with moist curb sways the smooth Severn stream,

Sabrina is her name, a virgin pure”

The legend tells of Sabrina’s father, Locrine, who at one time ruled over most of the land now known as England.  Locrine lead the fight against the Huns, who invaded the country, and he was joined by Camber, who ruled the west (now Wales) and the people from the north (now Scotland), whose ruler Albanact was killed by the Huns.

Locrine defeated the Huns and their King – Humber – was drowned in the river, which is now named after him.  Humber left behind the beautiful Hunnish princess Estrildis and Locrine fell in lover with her.  However, he was already engaged to Gwendolen, whose father Corineus ruled over Cornwall.  This caused something of a scandal and Corineus forced Locrine to do justice to his daughter Gwendolen and marry her at once.  This Locrine did, but he still loved Estrildis and so he kept her secretly at his palace for seven years.  During this time, she bore him a beautiful daughter called Sabre or Sabrina (the Roman version) and Gwendolen bore him a son called Madan.

When old Corineus died, Locrine divorced Gwendolen and brought his love for Estrildis and Sabre out into the open.  However, Gwendolen, backed by her own Cornish people, declared war against her former husband and fought a battle with him, in which he was killed.  Gwendolen then governed the whole of Britain for her son Madan and ordered Estrildis and her innocent daughter Sabre to be thrown into the river and drowned.  Gwendolen then commanded everyone to call the river after Sabre, so that they would always remember her and the “bad deeds” of her father.

Sabre becomes Sabrina in its Latin form but the British version is Sabern.  Today this has altered only slightly to become the River Severn.

Knowing this story, it is very easy to see that this sculpture illustrates the part of the legend when Sabrina is about to be thrown into the river.  However, without knowing the story, there is nothing to suggest that this sculpture has any link whatsoever with a river!  In fact, idealised female nudes such as this appear in many 19th century paintings and sculptures by mainstream artists.  Because they were given mythological or historical titles, they were considered to be “acceptable” by 19th century audiences.  The same represent real, living women.  This double standard lasted for many years and can still be traced in some of the “pin-ups” which appear in magazines today

Plan your visit to the Art Gallery here.