When our exhibition Mayflower 400 opened back in January we could not have anticipated the wonderful reception it received. While our gallery doors are closed, we bring you Mayflower 400 online so you can still enjoy it!

On this page: hear from our World Cultures Curator who developed the exhibition, browse the information panels just like you would in the gallery, and find extra discussion topics, articles and activities.

Video filmed by Kirsty Hatton at the University of Worcester

Browse through the text panels, get a close up look at some of the wonderful objects featured in Mayflower 400, including a beautiful seal-gut parka which was conserved specially for the display. Click the tabs below to move through highlights of the exhibition. 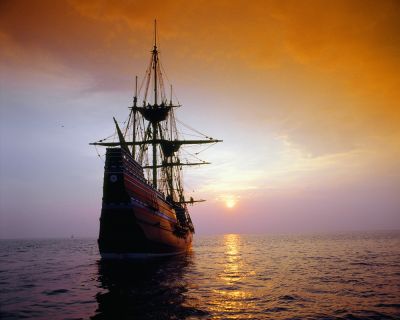 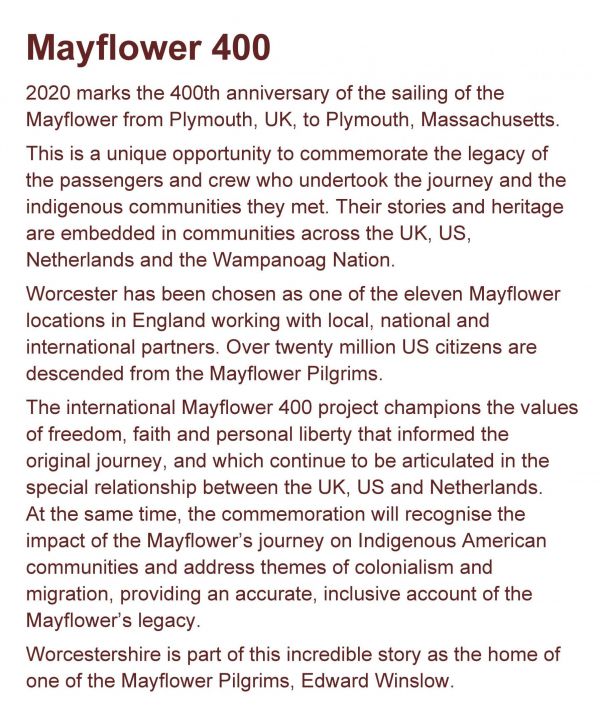 2020 marks the 400th anniversary of the sailing of the Mayflower from Plymouth, UK, to Plymouth, Massachusetts. This is a unique opportunity to commemorate the legacy of the passengers and crew who undertook the journey and the indigenous communities they met. Their stories and heritage are embedded in communities across the UK, US, Netherlands and the Wampanoag Nation.

Worcester has been chosen as one of the eleven Mayflower locations in England working with local, national and international partners. Over twenty million US citizens are descended from the Mayflower Pilgrims.

The international Mayflower 400 project champions the values of freedom, faith and personal liberty that informed the original journey, and which continue to be articulated in the special relationship between the UK, US and Netherlands. At the same time, the commemoration will recognise the impact of the Mayflower’s journey on Indigenous American communities and address themes of colonialism and migration, providing an accurate, inclusive account of the Mayflower’s legacy.

Worcestershire is part of this incredible story as the home of one of the Mayflower Pilgrims, Edward Winslow. 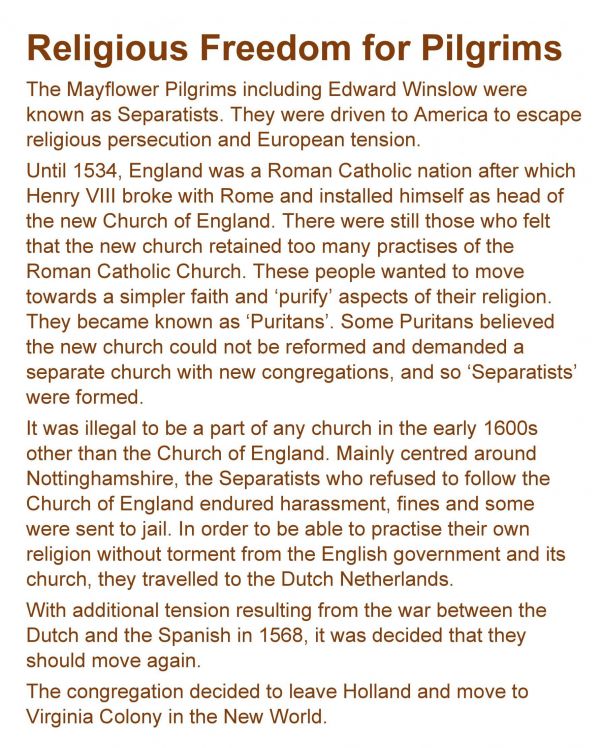 The Mayflower Pilgrims including Edward Winslow were known as Separatists. They were driven to America to escape religious persecution and European tension.

Until 1534, England was a Roman Catholic nation after which Henry VIII broke with Rome and installed himself as head of the new Church of England. There were still those who felt that the new church retained too many practises of the Roman Catholic Church. These people wanted to move towards a simpler faith and ‘purify’ aspects of their religion. They became known as ‘Puritans’. Some Puritans believed the new church could not be reformed and demanded a separate church with new congregations, and so ‘Separatists’ were formed.

It was illegal to be a part of any church in the early 1600s other than the Church of England. Mainly centred around Nottinghamshire, the Separatists who refused to follow the Church of England endured harassment, fines and some were sent to jail. In order to be able to practise their own religion without torment from the English government and its church, they travelled to the Dutch Netherlands.

With additional tension resulting from the war between the Dutch and the Spanish in 1568, it was decided that they should move again.
The congregation decided to leave Holland and move to Virginia Colony in the New World. 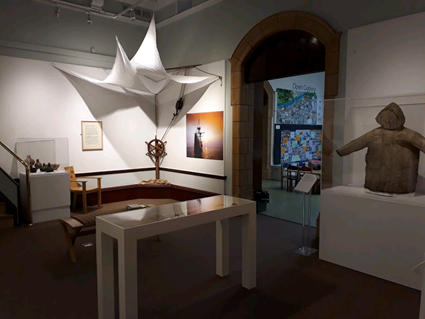 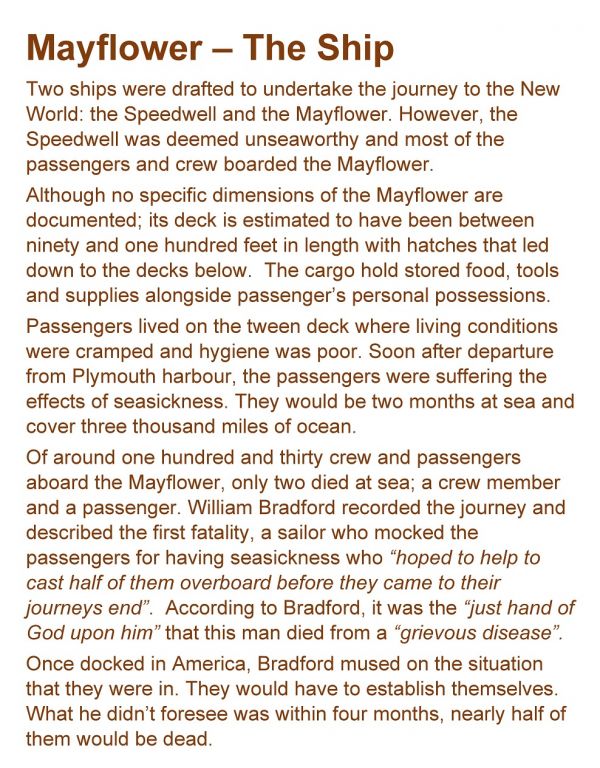 Although no specific dimensions of the Mayflower are documented; its deck is estimated to have been between ninety and one hundred feet in length with hatches that led down to the decks below. The cargo hold stored food, tools and supplies alongside passenger’s personal possessions.

Passengers lived on the tween deck where living conditions were cramped and hygiene was poor. Soon after departure from Plymouth harbour, the passengers were suffering the effects of seasickness. They would be two months at sea and cover three thousand miles of ocean.

Of around one hundred and thirty crew and passengers aboard the Mayflower, only two died at sea; a crew member and a passenger. William Bradford recorded the journey and described the first fatality, a sailor who mocked the passengers for having seasickness who “hoped to help to cast half of them overboard before they came to their journeys end”. According to Bradford, it was the “just hand of God upon him” that this man died from a “grievous disease”.

Once docked in America, Bradford mused on the situation that they were in. They would have to establish themselves. What he didn’t foresee was within four months, nearly half of them would be dead. 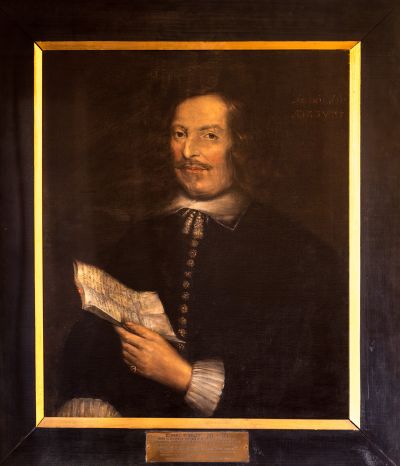 A portrait of Edward Winslow painted in 1651 in London. Pilgrim Museum in Plymouth, Massachusetts. 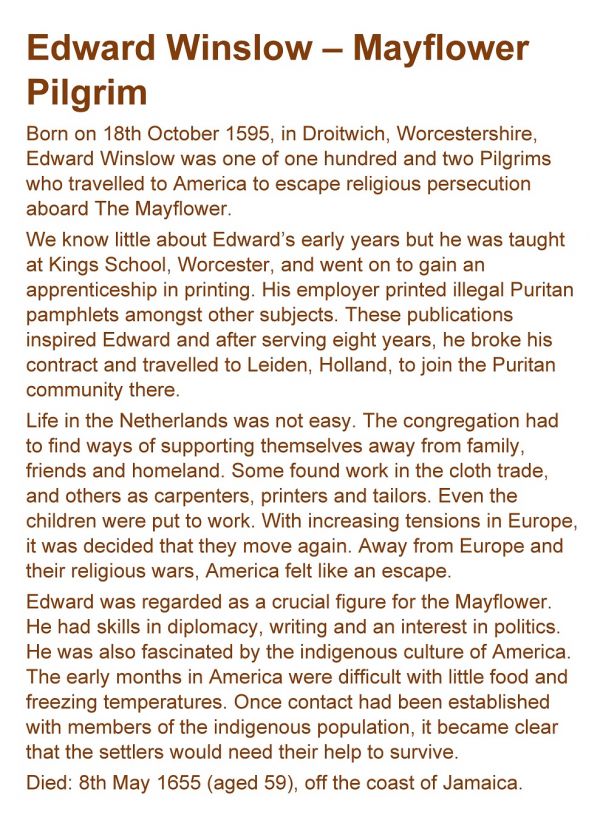 Born on 18th October 1595, in Droitwich, Worcestershire, Edward Winslow was one of one hundred and two Pilgrims who travelled to America to escape religious persecution aboard The Mayflower.

We know little about Edward’s early years but he was taught at Kings School, Worcester, and went on to gain an apprenticeship in printing. His employer printed illegal Puritan pamphlets amongst other subjects. These publications inspired Edward and after serving eight years, he broke his contract and travelled to Leiden, Holland, to join the Puritan community there.

Life in the Netherlands was not easy. The congregation had to find ways of supporting themselves away from family, friends and homeland. Some found work in the cloth trade, and others as carpenters, printers and tailors. Even the children were put to work. With increasing tensions in Europe, it was decided that they move again. Away from Europe and their religious wars, America felt like an escape.

Edward was regarded as a crucial figure for the Mayflower. He had skills in diplomacy, writing and an interest in politics. He was also fascinated by the indigenous culture of America. The early months in America were difficult with little food and freezing temperatures. Once contact had been established with members of the indigenous population, it became clear that the settlers would need their help to survive.
Died: 8th May 1655 (aged 59), off the coast of Jamaica. 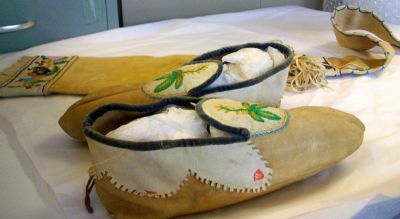 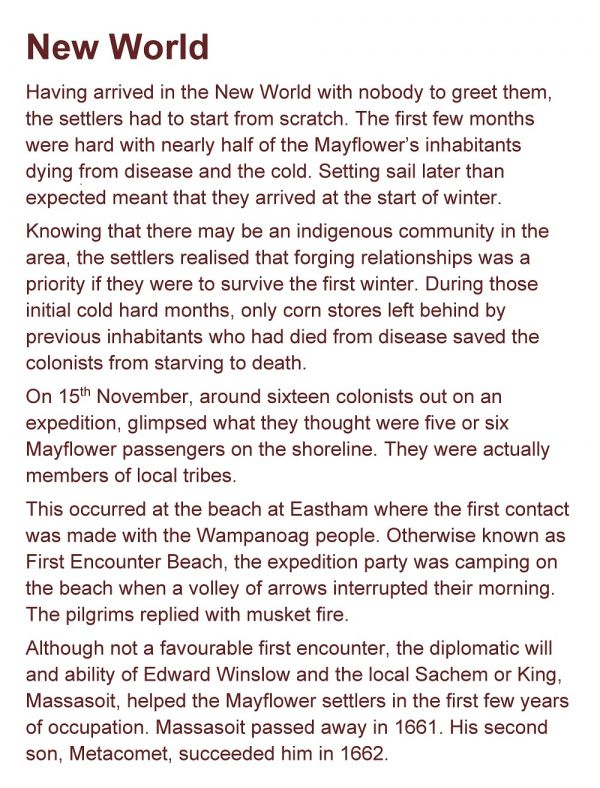 Having arrived in the New World with nobody to greet them, the settlers had to start from scratch. The first few months were hard with nearly half of the Mayflower’s inhabitants dying from disease and the cold. Setting sail later than expected meant that they arrived at the start of winter.
Knowing that there may be an indigenous community in the area, the settlers realised that forging relationships was a priority if they were to survive the first winter. During those initial cold hard months, only corn stores left behind by previous inhabitants who had died from disease saved the colonists from starving to death.

On 15th November, around sixteen colonists out on an expedition, glimpsed what they thought were five or six Mayflower passengers on the shoreline. They were actually members of local tribes.

This occurred at the beach at Eastham where the first contact was made with the Wampanoag people. Otherwise known as First Encounter Beach, the expedition party was camping on the beach when a volley of arrows interrupted their morning. The pilgrims replied with musket fire.

Although not a favourable first encounter, the diplomatic will and ability of Edward Winslow and the local Sachem or King, Massasoit, helped the Mayflower settlers in the first few years of occupation. Massasoit passed away in 1661. His second son, Metacomet, succeeded him in 1662. 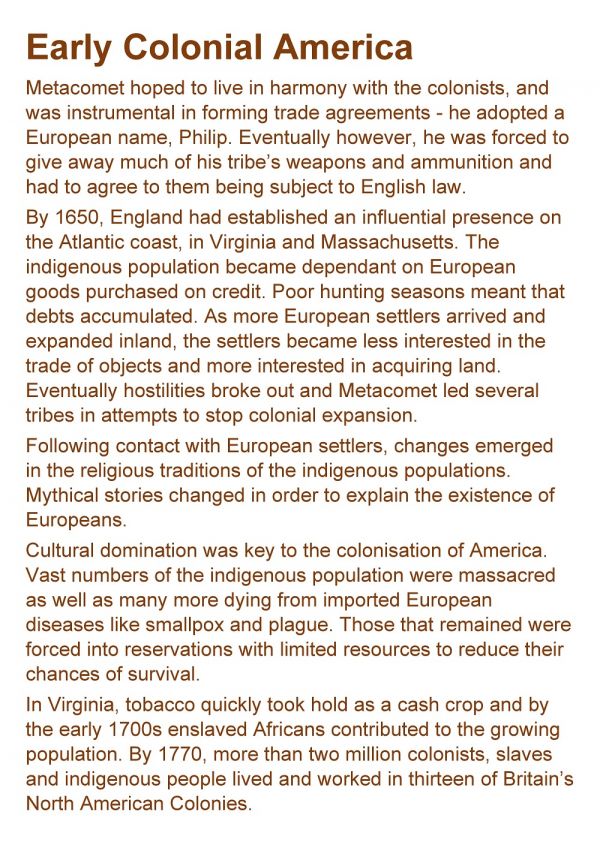 Metacomet hoped to live in harmony with the colonists, and was instrumental in forming trade agreements – he adopted a European name, Philip. Eventually however, he was forced to give away much of his tribe’s weapons and ammunition and had to agree to them being subject to English law.

By 1650, England had established an influential presence on the Atlantic coast, in Virginia and Massachusetts. The indigenous population became dependant on European goods purchased on credit. Poor hunting seasons meant that debts accumulated. As more European settlers arrived and expanded inland, the settlers became less interested in the trade of objects and more interested in acquiring land. Eventually hostilities broke out and Metacomet led several tribes in attempts to stop colonial expansion.

Following contact with European settlers, changes emerged in the religious traditions of the indigenous populations. Mythical stories changed in order to explain the existence of Europeans.

Cultural domination was key to the colonisation of America. Vast numbers of the indigenous population were massacred as well as many more dying from imported European diseases like smallpox and plague. Those that remained were forced into reservations with limited resources to reduce their chances of survival.

In Virginia, tobacco quickly took hold as a cash crop and by the early 1700s enslaved Africans contributed to the growing population. By 1770, more than two million colonists, slaves and indigenous people lived and worked in thirteen of Britain’s North American Colonies. 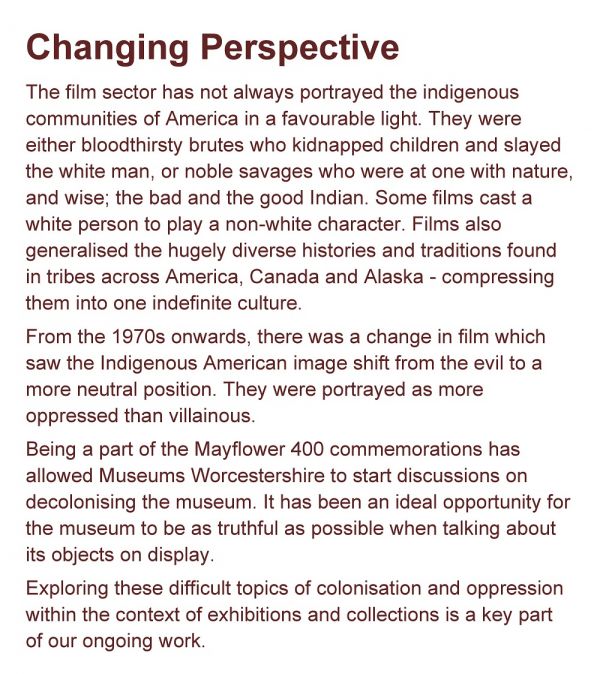 The film sector has not always portrayed the indigenous communities of America in a favourable light. They were either bloodthirsty brutes who kidnapped children and slayed the white man, or noble savages who were at one with nature, and wise; the bad and the good Indian. Some films cast a white person to play a non-white character. Films also generalised the hugely diverse histories and traditions found in tribes across America, Canada and Alaska – compressing them into one indefinite culture.

From the 1970s onwards, there was a change in film which saw the Indigenous American image shift from the evil to a more neutral position. They were portrayed as more oppressed than villainous.

Being a part of the Mayflower 400 commemorations has allowed Museums Worcestershire to start discussions on decolonising the museum. It has been an ideal opportunity for the museum to be as truthful as possible when talking about its objects on display.

Exploring these difficult topics of colonisation and oppression within the context of exhibitions and collections is a key part of our ongoing work.

Take time to consider the impact of the Mayflower’s voyage with our discussion prompts. Museums up and down the country are researching their collections and finding hidden histories and difficult stories of empire and colonialism within them. Many of the objects from North America and Canada in the World Cultures Collection are typical of items that were brought back as souvenirs by British sailors, adventurers and colonial officials. Several items, like the gun sleeve seen in the images below, even have prices written on them.

Many British men who went to the Canadian northwest wore clothing influenced by indigenous designs and commissioned souvenirs shortly before heading home. As indigenous peoples were forced onto reservations, they lost control of hunting and trapping areas through the processes of colonialism. Objects were produced as an alternative source of income and became an important part of the Indigenous economy. Many items were made by local communities sitting together, speaking their own language and telling traditional stories to preserve their identity.

Should museums continue to collect and display cultural material? Does it make a difference if the items are purchased?

Maximise your family’s learning with our Mayflower 400 creative activities below. Part of our Museum Make-athon activities released on our social media accounts every Tuesday & Thursday our museums are closed – designed to get you discovering, exploring and creating together.

It's Tuesday so it's Museum Make-athon time! Today, to celebrate the launch of our Mayflower 400 exhibition going... 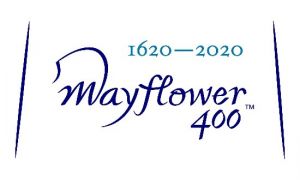 Museums Worcestershire are a proud partner
of Mayflower 400 celebrating the 400th anniversary
of the Mayflower’s voyage.