Worcester City Art Gallery & Museum presents a new exhibition exploring the fact and the fiction behind one of the most fascinating and tumultuous periods of British history. Georgians: the Pride and the Prejudice is designed to lead the viewer on a Grand Tour of Regency Worcester, taking in the beautiful landscapes, exquisite interiors and pastimes of the Bennetts and Darcy’s of the city, emerging into the wider world to see at what cost the pursuit of pleasure and elegance. The exhibition opens 18 January until 28 March and entry is free. 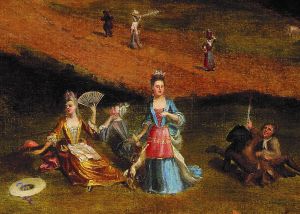 The exhibition brings together for the first time a wealth of art and artefacts from the museum’s own collections including works by John Downman, one of the most popular watercolour portraitists of the late 18th century, and the renowned pastelist John Russell, as well as Georgian costume, a rare Erard harp and a stunning Sedan chair, together with a first edition of Pride and Prejudice from a private lender.

The Georgian period captivates an audience like no other. The grandeur of the architecture, the extravagance of the fashion and the intricacies of the social etiquette create a wonderful image of elegance and exuberance which has been celebrated time and time again in literature, television and film. The exhibition begins in Regency Worcester but ends with a glimpse into the fragile reality upon which it was built. Behind the extravagances of the Georgian period was the exploitation of people, in plantations, in the colonies or in the factories and slums.

Exhibition Curator Claire Cheshire says: “This exhibition celebrates Worcester’s landscapes and its trades. In fine houses across the country there would have been Royal Worcester porcelain, gloves, and even Worcester-made bricks. Georgians: the Pride and the Prejudice will be a visual delight for all visitors.”

Georgians: the Pride and the Prejudice is free and runs from 18 January until 28 March, more information can be found here: www.museumsworcestershire.org.uk

For a more in-depth look at the exhibition and to discover some of the stories behind the objects on display join a Curators Tour on 16th March, 11.30am. No booking needed. £3 per person.

Georgians: the Pride and the Prejudice
Saturday 18 January until Saturday 28 March 2020
FREE ENTRY
Exploring the fact and the fiction behind one of the most fascinating and tumultuous periods of British history through artworks, costume and literature.

Saturday 25 January
Showcase Saturday – Discover more about the Wonderful World of Georgian Theatre at a family-friendly talk, followed by a mini make-and-take.
11.30am – 12.00pm, £3 per child

Tuesday 11 February
Bite sized talk – Georgians: the Pride and the Prejudice – the stories behind the objects
1-1.30pm. £3