A new exhibition at Worcester City Art Gallery & Museum uses artworks from the 18th century to the contemporary to explore the lure of the ruin and our fascination with what has passed. 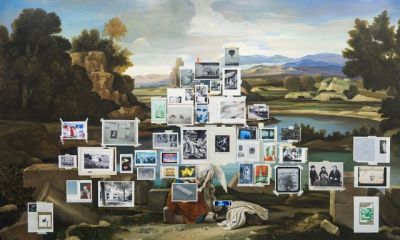 Curated in partnership with Meadow Arts, the exhibition draws on work by contemporary artists including Ged Quinn, Alex Hartley and Mark Fairnington alongside important artworks from the museum’s collection and includes a series of exciting works on loan from Tate.

Ruins have the power to fascinate like few other subjects. They confront the viewer with essential questions about our time on earth; inviting us to reflect on what has passed and to consider what may follow. As a result, ruins place us firmly in an unavoidable and highly defined present that we must confront, and where crucial questions are raised: What must be preserved? What will be lost? What has value?

Co-curator of the exhibition, Meadow Arts’ Anne de Charmant says: “Within art history the motif of the ruin seems to be aesthetically constructed from a series of recurrent, well-defined representations: a fallen column here, the collapsed remains of a temple there, a crumbling castle in the distance… all standing in a magnificent landscape. This iconic proposition has gone a long way to popularise the subject and anchor it our collective imagination.”

Although present in art from the 16th century, the motif of the ruin became increasingly popular from the 18th century onwards, thanks to artists who engaged in the Grand Tour, the formative trip to see Italy’s classical monuments and landscape. Painters like Richard Wilson, included in the exhibition, indulged in the genre to respond to an insatiable desire for more ruins. In the 19th century the Romantic movement was a huge consumer of ruins and this influenced artists all over Europe and beyond; a real lust for ruins was born and continued well into the 20th century by artists such as John Piper.

As Ged Quinn’s Bela Forgets the Scissors shows however, the subject can quickly become a cliché, over-loaded with cultural references. Here dozens of small images are overlaid on a reproduction of a large painting by Nicholas Poussin dominated by classical architectural fragments. These are obscured by the series of collaged images, constructing a complex web of references that echoes the complexity of the broader subject of ruins itself.

The exhibition also explores ruins that sit outside the mould of the traditional classical aesthetic. Ruins can often be remnants of political and social turmoil, surviving debris of intended destruction. Such ruins act as warnings and symbolise the fact that all societies, even the most self-assured, are constantly in danger of collapse. Ruins as a result of natural disasters act as reminder that at any given time all can be lost. The warning is against complacency, overconfidence and vanity. Today artists take up the baton of the ruin to warn and alert our society of the new dangers ahead such as climate change.

Living with ruins reminds us that nothing is fixed but rather that our man made environment is in a permanent state of collapse, building and shifting.

Living Ruins is free and open Monday – Saturday 10.30am – 4.30pm. For more information contact the Art Gallery and Museum on 01905 25371, check the event pages of our website or follow @worcestermuseum.
This exhibition has been made possible through the Ferryman Project: Sharing Works of Art which is supported by National Lottery Players through The National Lottery Heritage Fund, the John Ellerman Foundation and Art Fund.