It is believed that the specimen on display here was captured in the Severn at Worcester on 25th July 1835, At the Autumn meeting of the Worcestershire Natural History Society in 1835, Sir Charles Hastings reported that “the specimen of Sturgeon caught in Worcester this year had been presented to the Museum”. This being the case, it would make this one of the earliest acquisitions to our collections, coming just two years after the Museum was founded in 1833. At one time, it was thought that it could be the fish that was caught in the River at Diglis in 1843; this fish at the time was placed against the south wall of the water gate and its shape cut out around it with a chisel – which incidentally can still be seen today. However, after measuring both, it is clearly not the same one, as ours is a good two feet (61cms) longer. 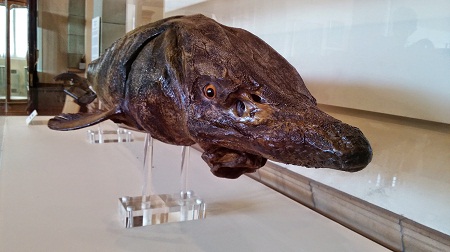 The Sturgeon belongs to a group of very primitive fish which can be traced back many millions of years.  Its huge torpedo shaped, elongated body and five rows of bony plate make it easily recognisable.

The tail is very unusual as the backbone turns up into the upper lobe.  Its mouth is also unusual, being almost funnel shaped and toothless with an extending feeding tube which sucks up mainly molluscs, worms and other invertebrate material.

Sturgeons are fish of the North Atlantic Ocean.  Only coming into freshwater to breed, it is here where they are most likely to be seen.  They can reach a size of twelve feet (365cm) or more in length, making them the largest species of fish that would normally be found in freshwater.

Once they access the rivers, they travel upstream to their spawning beds.  In these deep gravel beds, the eggs are deposited sticking readily to the stones and pebbles.  The young fish stay in the rivers for about three years and then go to sea.  It will be eight years before they return to begin a new generation of fish.

During the spawning months, sometimes early February, March, May or late July, these fish are caught in large rivers throughout Europe and the British Isles.  For many centuries it has been a highly prized fish for the captor.  The Roe (eggs) from the female is none other than Caviar.

Even in Medieval times the value of the Sturgeon was appreciated.  In 1324 the King of England, Edward II, decreed the Sturgeon as a ‘Royal Fish’, by an Act of Parliament which, in theory, still stands today and claims any fish caught in British freshwaters belongs to the sovereign.  Although the fish recorded in our waters are normally stragglers coming from Scandinavia and the Black Sea area, they were not as unusual as they would be today.  This is because there are more weirs, locks and other water features that would prevent them reaching water, for instance as far upstream as the Midlands (River Severn and Wye).  This can also be confirmed throughout Europe, as sturgeons were already recorded on the Shannon, Rhine and Danube, these are now few and far between. Pollution is also said to have taken its toll on the fish, as the number of breeding adults has dwindled considerably. 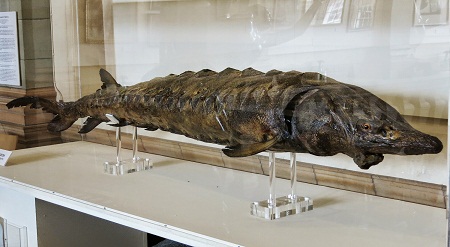