Visit highlights of our newest exhibition from home! Skyscape celebrates the skies, their important role in art and the emotions they can evoke. Here we explore how some of Europe’s most famous artists have captured the sky in their paintings.

Click the tabs below to move through highlights of the exhibition.
Remember to visit us regularly as we will be updating the page regularly with new artworks, discussion topics, activities and beautiful quotes. 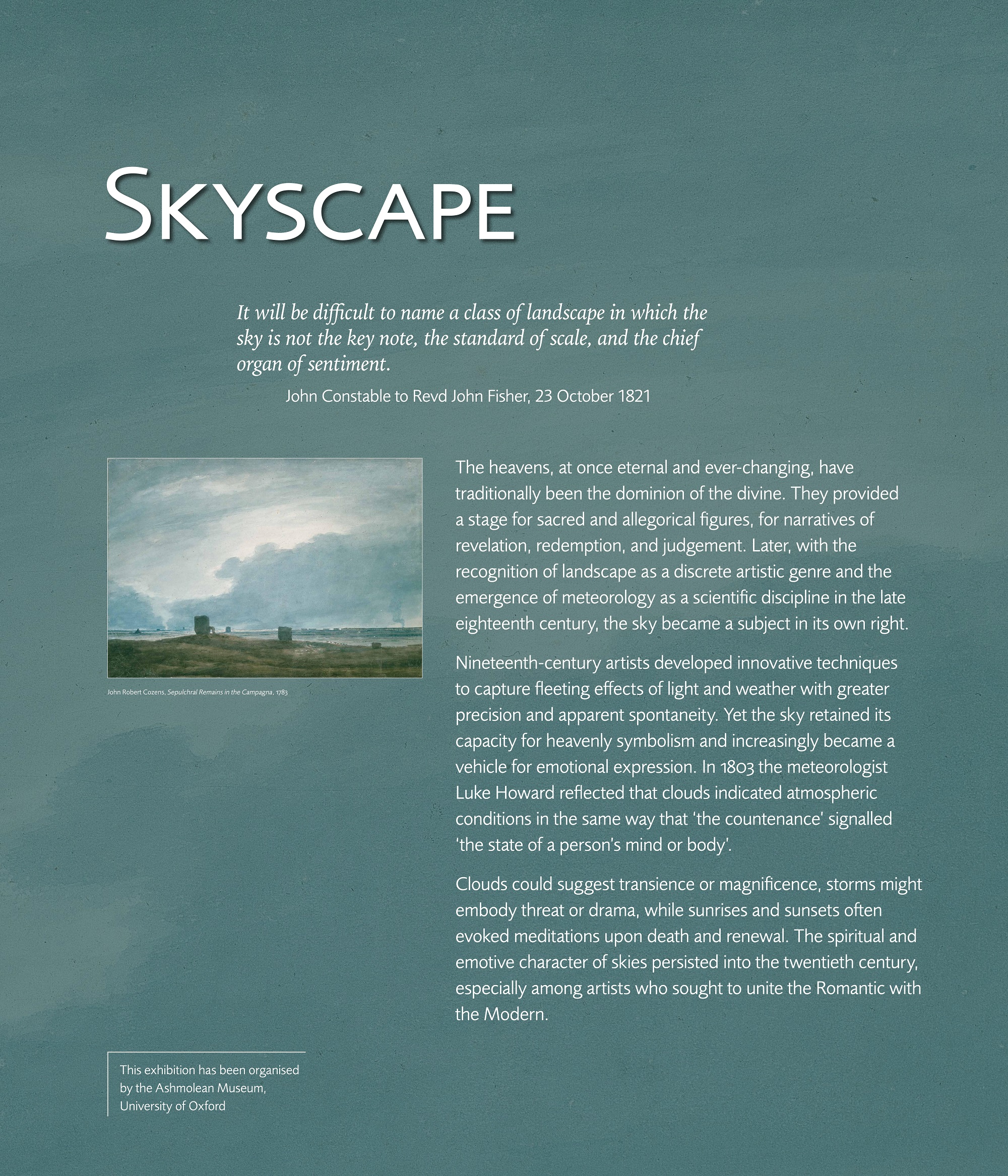 It will be difficult to name a class of landscape in which the sky is not the key note, the standard of scale, and the chief organ of sentiment.
– John Constable to Revd John Fisher, 23 October 1821

The heavens, at once eternal and ever-changing, have traditionally been the dominion of the divine. They provided a stage for sacred and allegorical figures, for narratives of revelation, redemption, and judgement. Later, with the recognition of landscape as a discrete artistic genre and the emergence of meteorology as a scientific discipline in the late eighteenth century, the sky became a subject in its own right.

Nineteenth-century artists developed innovative techniques to capture fleeting effects of light and weather with greater precision and apparent spontaneity. Yet the sky retained its capacity for heavenly symbolism and increasingly became a vehicle for emotional expression. In 1803 the meteorologist Luke Howard reflected that clouds indicated atmospheric conditions in the same way that ‘the countenance’ signalled ‘the state of a person’s mind or body’.

Clouds could suggest transience or magnificence, storms might embody threat or drama, while sunrises and sunsets often evoked meditations upon death and renewal. The spiritual and emotive character of skies persisted into the twentieth century, especially among artists who sought to unite the Romantic with the Modern.

This exhibition has been organised by the Ashmolean Museum, University of Oxford 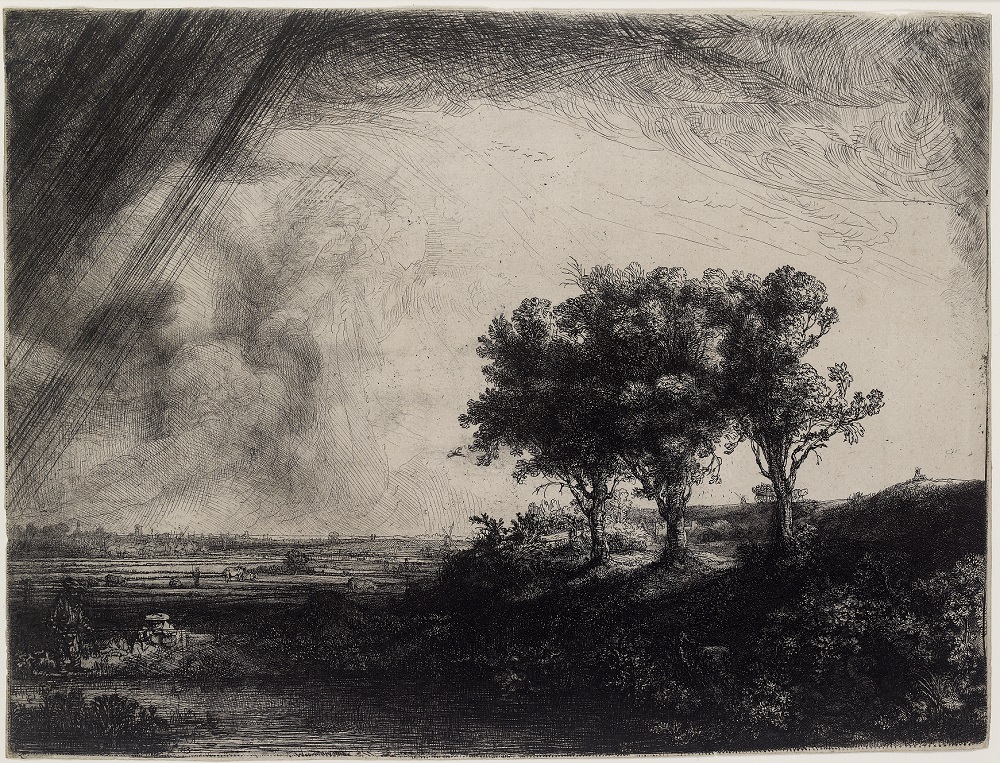 Rembrandt’s largest landscape etching has long been regarded as one of his finest; Constable purchased an impression of it from the print dealer Dominic Colnaghi in 1827. The plate’s original subject was the Death of the Virgin, and the drapes of her bed canopy are visible in the unusual heavily worked sky. The breezy rain-lashed scene is filled with incidents including a crammed carriage, an artist sketching, and a couple secluded in the foreground. In the distance, Amsterdam’s skyline appears through a mist of precipitation. The three trees may represent the three crosses of Calvary; the storm, the darkness descending at the moment of Christ’s death. 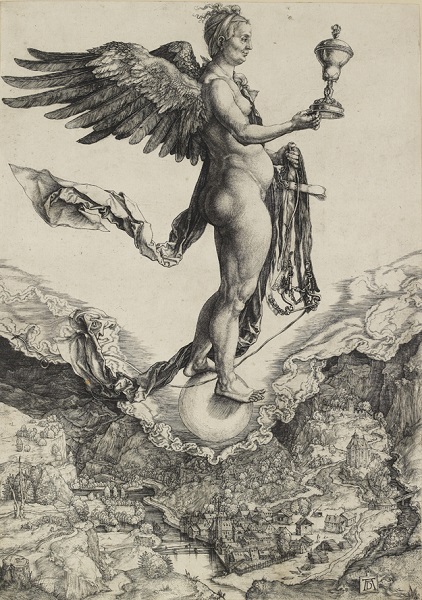 In 1494, spurred by an outbreak of plague in Nuremberg, Dürer crossed the Alps to Venice, returning the following year. This meticulously depicted valley is Chiusa in the Southern Tyrol. Human life, however, is dwarfed by an imposing figure amid a blank cloud whose soft edges are composed of short parallel marks. She is Nemesis, combining the attributes of the classical goddess of retribution with the winged figure of Fortune. Traversing the sky on a globe, she precariously proffers a covered cup representing reward, while clutching a bridle portending punishment. This was one of Dürer’s most popular prints, and an impression was owned by the painter John Constable. 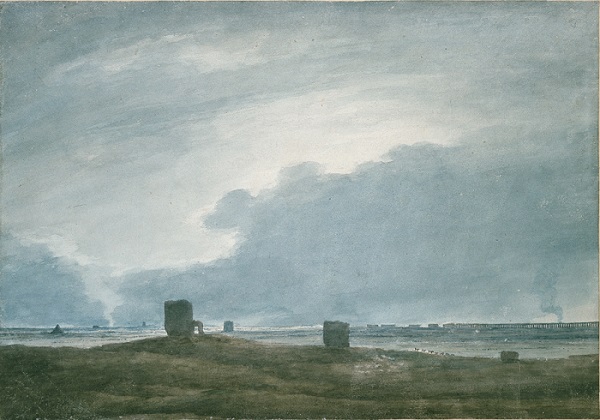 The son of the Eton drawing master, Alexander Cozens (c. 1717–1786), J. R. Cozens’s works were copied by Girtin and J. M. W. Turner. Forgoing dependence on outline he instead pioneered blended atmospheric washes. With William Beckford, his father’s former pupil, Cozens made his second trip to Italy in 1780–3. The soft clouds dwarf the architectural remains seen from the Via Appia looking towards Rome, with the aqueduct, Caligula’s Aqua Claudia, on the right. These noble ruins are contrasted with a procession of seven goats. The majestic desolation is unrelieved by two plumes of smoke, signs of distant human activity, that merge with the vast sky. 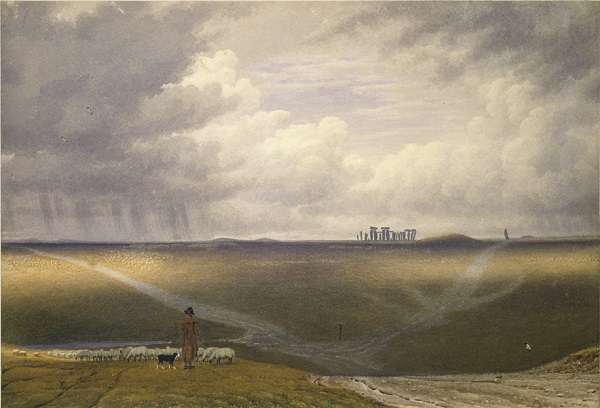 William Turner of Oxford
Stonehenge – A Showery Day
1839, Watercolour and bodycolour with some scratching out, over indications in graphite
Ashmolean Museum, presented by Stephen N. Furness, 1948 WA1948.40

William Turner was elected a full member of the Society of Painters in Watercolour in 1808. He returned from London to Oxfordshire in 1811, where he worked as a drawing master. Many of his 455 exhibited watercolours depicted Oxfordshire but he also undertook sketching tours throughout Britain. The dominance of the sky in William Turner’s compositions is typified by his views of Stonehenge. Here the shepherd looks not towards the monument on the distant horizon, but to the left, assessing the path of  an approaching shower. Turner’s particular accuracy in portraying clouds earned him the praise of John Ruskin in 1859. 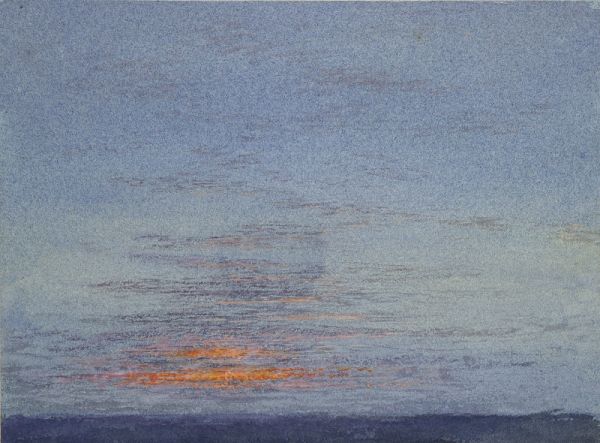 John Ruskin
Study of Dawn: The First Scarlet on the Clouds
1868, watercolour and bodycolour over graphite
Ashmolean Museum, presented by John Ruskin to the University of Oxford, 1875 WA.RS.ED.003

Ruskin remarked that he ‘bottled skies’ just as his father, a prosperous sherry merchant, preserved vintages. In March 1868, he made a series of watercolours of the dawn from his home on Denmark Hill, south of London, which enjoyed views towards Kent. He had recommended  this daily discipline in The Elements of Drawing (1857), declaring ‘Love that rightly with all  your heart, and soul, and eyes; and you are established in foundation laws of colour’ and echoing Christ’s response to the question ‘which  is the greatest commandment’, ‘Love the Lord your God with all your heart, and with all your soul, and with all your mind’ (Matthew 22.36–7).

Hunt combined Pre-Raphaelite principles of fidelity to nature with reverence for J. M. W. Turner’s atmospheric effects. During the winter of 1869–70 he and his wife toured the Mediterranean with the textile manufacturer, Sidney Courtauld on his yacht, Egidia. Four Ashmolean sketchbooks give glimpses of this voyage. None, however, show cloud formations identical to this view off the Peloponnese.

Ruskin believed Hunt’s memories of the trip would prove inspiring, but it is possible that he incorporated observations from his Kensington studio into this arresting sunset. The luminous colours and shadow of the clouds are carefully observed on the gently swelling waves, while the ships’ lanterns signal dwindling light. 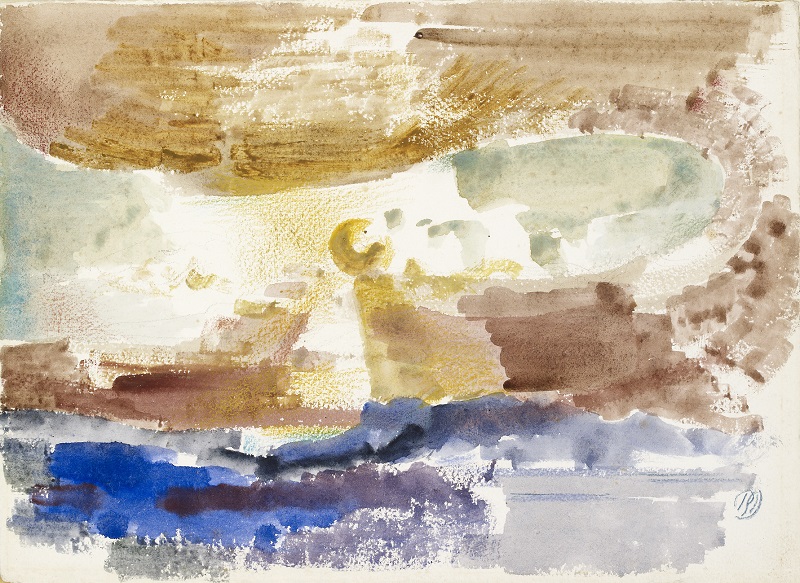 Nash was perennially preoccupied with symbolic aerial objects, from his drawings of floating Pre-Raphaelite heads following his mother’s death in 1910, to the blasted landscapes of the First World War, and the aeroplanes of the Second. During Christmas and New Year 1944–5, Nash, increasingly crippled by asthma, holidayed with his wife at The Rising Sun near Cleeve Hill, the highest point of the Cotswolds. Nash painted the magnificent view from his bedroom and the hotel sitting room, including seven Sun Descending studies. Partly inspired by Chinese painting, their uncharacteristically loose brushwork and vivid colours reminded contemporary critics of J. M. W. Turner.

This exhibition has been organised by
the Ashmolean Museum, University of Oxford.