In the museum world, a Herbarium is what we call a collection of plants which are formally preserved, catalogued and used for research. Herbaria collecting dates back over 500 years, but the specimens in Worcester’s collection were mainly gathered throughout the nineteenth century, with examples of many thousands of specimens of plants, lichens, fungi and ferns from that time. The most active collectors who can be thanked for a huge portion of the City’s herbarium are William Mathews and Richard Towndrow. The pair gathered, exchanged and purchased specimens of plants from all across Britain, always with a particular focus on the flora from their home county.

Natural history was an incredibly popular area for museum collections during the nineteenth century, and Worcester was an important centre of learning for the natural sciences at this time. Many of the specimens in the collection feature labels and stamps of dedicated sellers and exchange groups, demonstrating the popularity of this hobby and the interest in the natural world.

Looking after & learning from our Herbarium

Some of the specimens are very familiar to us today while others represent a genus or species which has since disappeared from our county. Specimens were often treated with various, often poisonous, chemicals to better preserve and present them, meaning museum staff have to take great care when working with them, often wearing protective clothing. In a process which has changed little since the earliest days of Herbaria collecting, each specimen is secured to a sheet of paper, and details about its location, the date and name of the collector, are recorded on the page.

The Herbarium today is a fantastic resource for studying changes to our regional habitats and native species, but also gives us insight into the ways our collectors and herbaria practices developed in general. As with many of the items in the museum collections, the labels are often as historically valuable as the object itself. For instance, they reveal that many specimens were obviously gathered on the spur of the moment as they are attached to letters, advertisements or receipts. This conjures images of a collector spotting a plant during their travels or perhaps running low on supplies and rummaging through pockets and drawers for scrap paper!

There are thousands of specimens in our Herbarium collection, and our museum team are conducting an ongoing project to organise and record them all so they can be understood better in the future. In the meantime, here are a few examples of the specimens we have. 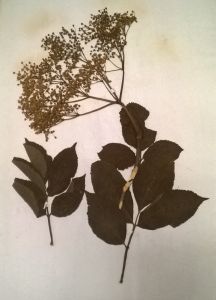 The Towndrow Collection contains one specimen of elder,  the trees likely to be spotted growing in hedgerows and along field boundaries. Elder trees are fast-growing can reach a height of 15m. They are a wonderful habitat tree for gardens. The older wood of the trunk is very hard, but it hollows with age, creating a wonderful habitat for nesting birds (you can see a Great Tit nesting in an Elder stump here on the right!) and all manner of insects and invertebrates. It is also a great choice for whittling into a variety of objects. The smaller newer twigs tend to be very pithy, and are great once hollowed out for all sorts of uses. 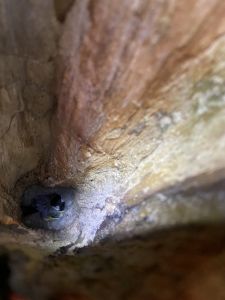 Look out for badger sets and rabbit warrens near by – Elder seeds are often distributed by animals in their droppings. Never pick flowers after rain, pick a nice dry sunny day to pick.  Despite their reputation as remedies for hay fever, the un-cooked flowers and berries of the tree are actually mildly poisonous, as with many trees, so please do take care when gathering or picking anything (and do not touch or eat anything you are unable to confidently identify). 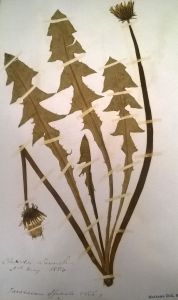 This specimen was collected in Claverdon in Warwickshire in 1884, and forms part of the Mathews Collection. The name dandelion derives from the words ‘dens lionis’ which means lion’s tooth and appears to have been first coined in the fifteenth century. The seeds inside the flower look a little like a lions tooth once dried out.

Dandelions have largely been kept out of the Victorian language of flowers due to their infamous reputation as a weed, but despite this they are special in many ways. They are a potent reminder of summer and their flowers have been used in many recipes around the world as they are a nutritious plant, high in fibre, vitamins and minerals. It also holds apparent healing qualities, having been recommended in traditional Chinese , indigenous American and early European medicine’s as a home-remedy for ailments as various as digestion problems, anaemia, scurvy, skin problems, kidney disease, diabetes, fevers, blood disorders and depression. So the next time you are weeding your garden, spare a thought for the dandelion you are about to pull up, there is more to it than meets the eye. 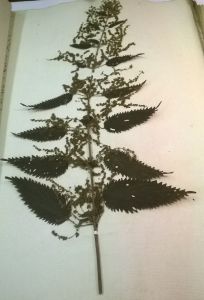 One plant that gets bad press is the stinging nettle. Unfortunately, there is no information with this specimen in our collection, whereas usually details are written by the collector as to date and where it was collected. A different system seems to have been adopted with the herbarium when these were gathered.

Many of the plants represented in the herbarium have medicinal and culinary qualities to them, and for the humble nettle, its not different. Nettles contain many nutrients and are very good for you, once you get past the sting! They can be used as ingredients in many dishes like hearty soups and as a medicinal plant the stinging nettle leaf and nettle tea is believed to be beneficial for treating water retention and high blood pressure. The humble nettle – delicious, nutritious and not at all painful!