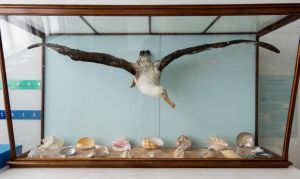 Albert’s Journey: From an Ocean in the Southern Hemisphere to the City of Worcester

For many years now the staff past and present at the Museum have wondered how this magnificent specimen of a Wandering Albatross or ‘Albert’, as he is more affectionately known, came to be at Worcester. After all, this is a bird of the Southern Oceans and totally alien to Britain, let alone Worcester in the centre of the Midlands.

As with many of the smaller Museums, Worcester’s early documentation of its specimens was at a minimum. Sometimes only the label which was put in the case with the object, is the only record that has survived. This usually consisted of the name of the specimen, sometimes where it was from, and who presented it, but rarely was a date mentioned.

The Story So Far…

Mr Percy Brown of RMS Waimate
Our only lead on Albert was an old label stating that he was a ‘young male Wandering Albatross, presented by Mr Percy Brown of RMS Waimate’.  We then made our first attempt at trying to actually establish who Mr Brown was and what kind of ship the RMS Waimate may have been.  A letter was sent to the National Maritime Museum at Greenwich, asking for any information they may have on Brown and the ship.  Their reply stated that the Waimate belonged to the New Zealand Shipping Company, which had been formed in the early 1870’s to carry immigrants and cargo from London to New Zealand.  She was one of four ships built in Sunderland and registered in 1874.  For 22 years she sailed between the two countries before being sold off to the Russians in 1896, but alas, no crew lists of her mentioned the name of Mr Brown.  We now had a band of dates for when we thought Albert had arrived here, but on following other leads and going down different channels, nothing else surfaced.

Then one day, by chance, whilst looking through old copies of the Libraries and Museums Annual Committee Reports, we saw in the entry for 1901-02 that ‘An Albatross in the Flesh’, had been presented by a Mr P. Brown.  This completely confused us – how could Mr Brown have given the Museum a fresh Albatross from a ship that had ceased to do the journey from New Zealand to London some five or six years previously?  With this new information we once again contacted the Maritime Museum and asked them the same question.  Their research unearthed the fact that a second vessel, also called the Waimate and owned by the New Zealand Shipping Company existed and was launched in 1896.  She also made the journeys between England and New Zealand.  A very interesting point came out that she was not only a cargo ship that carried passengers, but had refrigerator spaces for 90,000 carcasses.  This answered the question that we had pondered on for years – how could the bird have journeyed so far without showing any signs of deterioration prior to arriving in Worcester?

The Gift of an Albatross

Now that we had the date when the Albatross came here, we looked through the local newspapers for that year, finding articles written for March and April 1902.  It mentions Mr Brown presenting the bird and that the showcase (which he is still in), was made by a local carpenter, W.W. Hunt of South Quay, for a cost of £10.  We also know that the Curator at the time, Mr W. Edwards, who was a first class Taxidermist, was responsible for preserving it.

However, there were still no facts arising on Mr Brown.  The Maritime Museum had crew lists for the Waimate, but not for the years we wanted, although they did inform us that the ones for the late nineteenth and early twentieth centuries were held by the Maritime History Archive in the Memorial University of Newfoundland, Canada.  When we contacted them they informed us that for three voyages in the 1900–02 period, a Mr P. Brown was registered as a Refrigerator Engineer.  Copies of the crew lists were sent to us and we were then able to work out exactly which journey Albert had made.  Waimate left London Docks on the 30th July 1901, calling in South Africa in the October before reaching New Zealand in November; she returned to England and landed on the 24th February 1902.
Brown’s entry on the Waimate’s crew lists is P. Pryce Brown aged 32, born in Hereford with a home address of Notting Hill, London.  Other crew lists give him a Derby address.  We then wrote to the Record Office at Hereford to enquire if they knew of P.P. Brown.  They had found an entry for a Percy Brown aged 12 from Holmer, Hereford in the 1881 Census of England and Wales.  This would make him the right age of 32 when he went on his voyage in 1901.
Is this the same man?  Or coincidentally, was there a passenger on board with the same name?  So far our enquiries have taken us to London, Hereford, Carlisle, Otago in New Zealand and Newfoundland in Canada, but we still have no idea what Brown’s connection with Worcester was and why he brought Albert here!

If you would like to see Albert the Albatross, he can be found in Worcester City Art Gallery and Museum in the Activity Space.