History of The Commandery

Tradition has it that the building was founded as a hospital around 1085 by Saint Wulfstan, the then Bishop of Worcester.

The hospital was built around a much earlier Saxon chapel dedicated to Saint Gudwal – which was located to the South of the present building.

The building attributed to Saint Wulfstan was a monastic institution designed to act as a hospital. It seems to have been established with the needs of travellers in mind. Its location, just outside the city walls beside the Sidbury gate, put it at the junction of the main roads from London, Bath and Bristol. Here it could provide travellers with aid should they arrive after the closing of the gates at night.

Dissolution of the Monasteries

After serving its original function for nearly 500 years, the hospital was among the last monastic institutions to be dissolved by Henry VIII in 1540. From this date onwards The Commandery was to fulfil a number of vastly varied roles, from peaceful family home, to site of the final bloody battle of the English Civil War. The building itself would undergo a range of improvements, repairs and renovations throughout its history as each successive owner sought to leave their mark on this fascinating structure.

The Commandery has undergone many changes over the centuries, and is a complex patchwork of architectural styles as the structure was modified to suit the occupants of each period.

This chapel was a substantial structure, suggested by the remnants of stone pillars used as decoration in The Commandery gardens. The Hospital itself eventually assumed a shape typical of this period, an ‘H’-shape, with the Great Hall forming the crossing point between two wings, which still exist today. 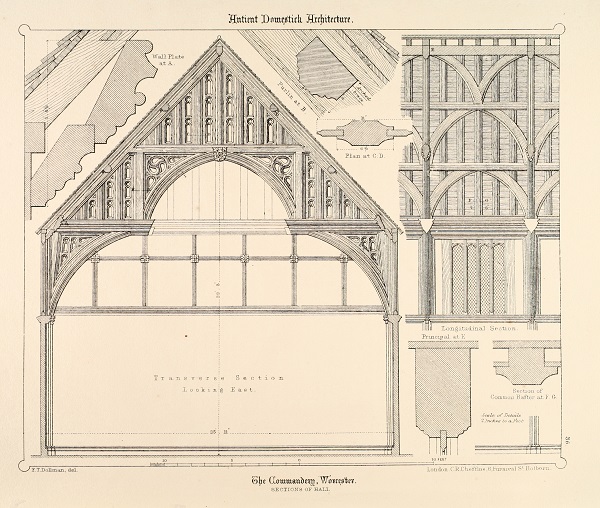 Most of the building dates from the late fifteenth century and is of timber-framed construction. Much of this timber frame would have been cut to size and fitted together in the timber yard before being dismantled and re-erected on site, making timber-framed buildings amongst the first “pre-fabs”.

So that each piece was put together in the right order, the timbers were marked by the carpenters. These marks can be seen throughout the building usually in the form of Roman numerals. The spaces between the beams were in-filled with wattle and daub. The wattle, a woven construction of wood was covered by the daub, a plaster whose ingredients could include mud, lime, cow dung, horse hair or straw.

Worcester played a decisive role in the English Civil War and the outcome of the Battle of Worcester changed the way that Great Britain was governed, creating the democracy we enjoy today.

The Commandery was given a dramatic new purpose in 1651 when Charles Stuart (later Charles II) marched into Worcester on the 22nd August 1651 at the head of 13,000 men and set up his Headquarters in the city. William, 2nd Duke of Hamilton, was the Royalist Commander in Chief and he and other officers were billeted at The Commandery.

Charles’ Royalist army had marched from Sterling in Scotland to Worcester, covering 350 miles in just three weeks. When they arrived in Worcester the soldiers, most of whom were Scots, were under equipped, some without shoes and their clothing in rags.

The Royalist troops spent the next two weeks preparing the city’s defences, including the fortification of Fort Royal Hill behind The Commandery and City Walls alongside the building.

On the 3rd September 1651, battle commenced at around noon with an attack from Oliver Cromwell’s 28,000 strong ‘New Model Army’. The battlefield covered a seven mile front from Powick to Red Hill, including the entire modern-day city.

After several strategic gains, the Royalists quickly faltered at the Sidbury Gate outside The Commandery and many soldiers were killed as they tried to flee. To commemorate those who lost their lives at the Battle of Worcester, an annual ceremony takes place on Fort Royal Hill on the 3 of September. The Duke of Hamilton was carried back into The Commandery with blood pouring from a wound in his leg, and he died about a week later. It is said that Hamilton’s body was hastily buried under The Commandery floor, before being exhumed and reburied in Worcester Cathedral.

Charles escaped from Worcester and fled into exile until his restoration to the throne nine years later. Despite this, the Restoration Settlement did not give back absolute control of government and military to the Crown and a more democratic rule is a legacy of the English Civil War.

Say you have been at Worcester, where England’s sorrows began, and where they are happily ended. Hugh Peter 1651.

“All England should come in Pilgrimage to this Hill, once a Year.” – John Adams, second President of the United States

Such is the importance of Worcester to the evolution of Liberty & Democracy that the City was visited in 1786 by the US senators John Adams and Thomas Jefferson, who went on to be the second and third Presidents of the United States of America. Standing on Fort Royal Hill, John Adams made a speech declaring the City to be the very ground ‘where liberty was fought for and won’ and invoking local people to ‘Tell your Neighbours and your Children that this is holy Ground, much holier than that on which your Churches stand. All England should come in Pilgrimage to this Hill, once a Year.’